A few nights back we ran a generic Regimental Fire & Fury scenario at the Baron's place.  With the exception of one player, there was not much experience amongst the group with RF&F, however, several had had experience with the original F&F rules.  I had only played F&F once and this was my maiden voyage into the world of RF&F.  Obviously I cannot speak from a lot of experience, but my biggest complaint with the game was that it moved too slow and units just weren't dissolving from combat very quickly.  Part of this could have been solved by better planning on my part (I'll give myself a pass this time since I was out of town for much of my holiday vacation). Shortly before the game began I threw out the caveat that all CS units would be using smoothbore muskets while all US units would carry rifled muskets.  This didn't allow the Rebs much of an opportunity to thin out the Union lines early on. In addition, it was my feeling that more artillery (each side was outfitted with only two gun stands - again rifled for Billy Yank and smoothbores for the Johnny Reb) would have helped whittle away at approaching units. There have been differing opinions on the need for more or less cannon. Several of the group have assured me that as everyone becomes more familiar with the rules, the scenarios will speed up.  All in all we had a good evening and I hope we get to run the rules again soon.

The two armies square off with each player controlling a few regiments. 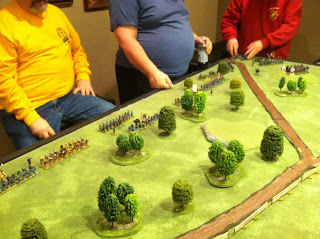 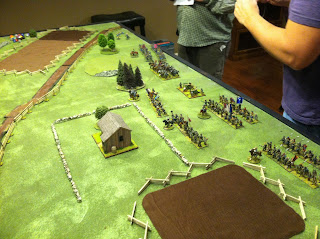 The Yankees make good time through a wooded area on their right and come upon a road.  Some lousy rolling and a small hill impede the Rebs' ability to make timely contact on the Union right. 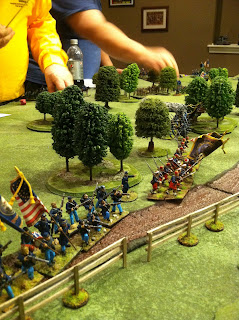 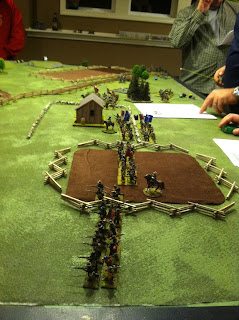 A unit of Reb cavalry begins to move from the right toward the center of the field but changes course and leads two infantry regiments in to a field and sets up shop behind some fence. 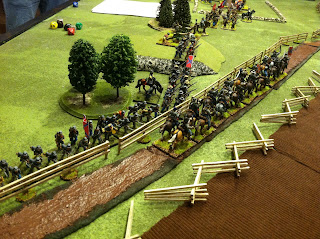 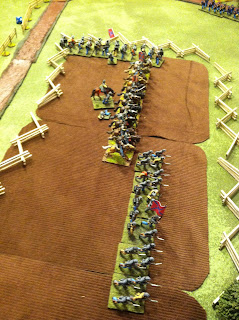 The Confederate center begins to take cover behind a stone wall. 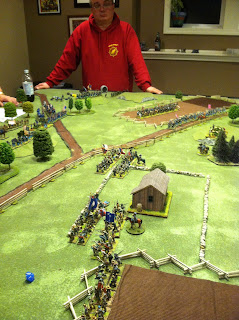 The Confederate center progresses past the flanks and a salient is formed.  The heaviest fighting of the evening ensues. 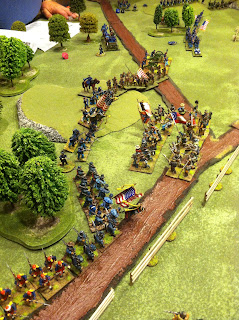 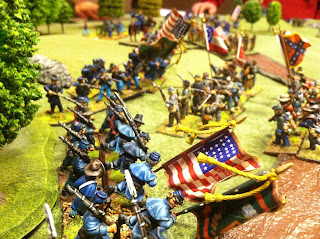 The Rebel left and center begins to wither.  The evening draws late and very well may be their saving grace. 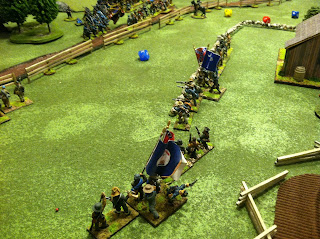 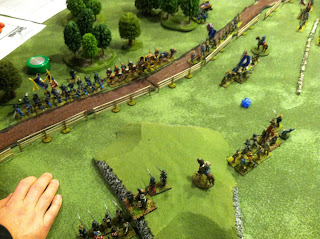 It will get faster. If we play this with any consistency, the game will speed up. I thought it worked fairly well for being the first time we played the rules with this group.
The casualty rate was pretty low. It was always hard to win F&F games with firepower. At some point, you needed to disorder them and just get stuck in.
I think we need a bit more unit density, so that we have reserves that can take advantage after the front units get chewed up a bit.

Bill, I agree with you on using reinforcements/reserves. Also, what are your thoughts on additional cannon?

I enjoyed the game. Loved the look of the figs, nice painting, and different representation of different units. I agree it would be nice to play more often, as more frequent play will help us learn and hence speed things up. Would be good to understand the core F&F rules better, but think it will be interesting to add in the additional elements and modifiers of RF&F (we played very vanilla). Was suprised at how few units were lost, even under such close quarter fighting and facing superior forces. I like Bill's take on reinforcements to exploit gains. I think there is a need to ensure the sides are more evenly created for strength prior to start, ie. if the union is going to have rifled guns, allow for more confederate troops. Then again, war aint always fair. As for the issue of additional cannon... I'm of mixed opinion, and probably need more play to make a determination, but... I found having only two cannon (gun) to be minimally influential during this engagement vs troops at a distance. Depending on die rolls, units might be disordered or may loose a unit, but quickly reordered upon next activation, and therefore not significantly affected. And the attack number (3) for just one gun firing on it's own was definitely insufficient to attempt any significant bombardament due to negative modifiers. The counter-battery fire also very quickly neutralized both side's guns, and then due to forced withdrawls, it would take a couple rounds to get gun back up to firing position (also, I understand troops withdrawing if low on ammo, but wouldn't guns stay in place and have the ammunition chest brought forward to the cannon, even if it would potentially expose the gun to enemy fire while rearming?) I was thinking that with more guns you could bring massed fire on units, however, not having the rules in front of me, I'm not sure if the rules allowed multiple guns giving massed fire to significantly attrit a unit, because as I recall, even with overwhelming fire (rifle or gun) a player only really faced loosing a single unit and being disordered. The guns did add a +2 if supporting a charge attack, so they could be helpful under the right circumstance. providing more guns to each Regiment might help support their tactics. At the link http://ehistory.osu.edu/uscw/features/regimental/artillery.cfm it read that until 1863, the Confederate armies and the western army of the Union assigned a battery to each infantry brigade, which was found to be a bad system since it eliminated the concentration of fire that was needed to beat back an attack. Four batteries were usually assigned to a division, and the composition of the individual batteries themselves varied in both armies and there was no set standard for either. Initially, a six-gun battery would have two howitzers; a 12-pounder battery thus had four 12-pound guns and two 24-pounder howitzers. A 6-pounder battery would have four 6-pounder guns and two 12-pounder howitzers. Seems there are several options.

Greg, I agree with you that while the Yanks had a decided advantage with rifled muskets, the outcome by night's end didn't really reflect it except for Jaye's infantry. Something will have to be done to speed up play in my opinion. It'll probably come with a combination of things; more balanced forces with reserves/reinforcements, clearer victory conditions, and with more of a familiarization of the rules. I cannot help but to believe that each side employing three 2-3 stand batteries spread across the table won't help more. It's really up to us (until we start running historical scenarios) whether or not we attach each battery to a brigade/division or have them start detached. There is a lot of information to absorb reading thru the rules. I don't know if anyone down at you end was doing it or not, but there's a sizeable section dedicated to attaching/detaching leaders and radii.

Very nice looking game guys! We prefer F&F for our ACW games and have done for many years. Now we use RF&F and enjoy them very much!