Last fall I met a group of gamers from the Kansas City area named The Basement Generals, founded by  BaronVonJ.  These guys do anything from many historical periods to sci-fi. So far I have found ACW and WW2 (with the exception of Flames of War)  to be some of the less popular periods in our area, but with the BGs willing to play about anything, I can get my fix.

Recently we have delved into a ruleset called Victory Decision. A thread for asking questions and new ideas can be found within the WW2 forums at Lead-Adventure.com. Feedback is outstanding (the writer, Agis, regularly participates in discussions). With little experience with WW2 gaming, I have found VD to be enjoyable. The rules are fairly simple to pick up with some play and according to some of the other fellas, the play seems to mimic what probably took place on the battlefield better than other sets. We have found with VD that recklessly leaving units in a firefight can lead to disastrous results. Players must draw units back from the fight in order to regroup if they expect to stay in the battle for very long. 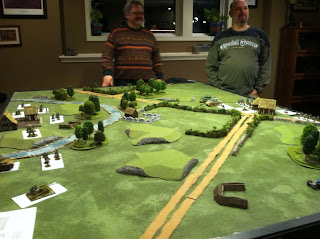 The two forces began their attacks by  making an all out run at a small cottage located at the center of the field. 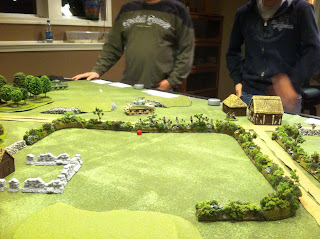 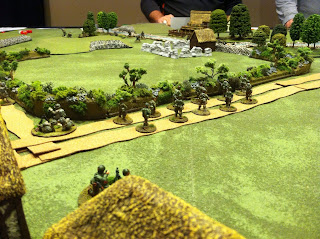 Hedgerows make for careful maneuvering by the Americans

While Scott started the game by rolling two saves to emerge unscathed after a Sherman fired on his PaK 40, he kept the German left flank secure. Elsewhere, heavy fighting broke out on the right. 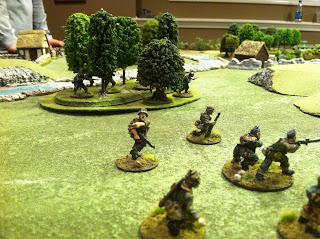 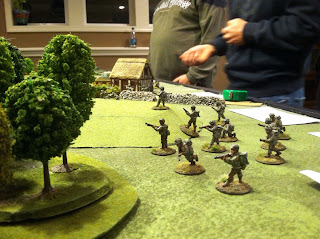 Fighting began to concentrate in the center of the field as one of Jay's units advances on the cottage but is repulsed by mortar and MG fire from multiple locations, but it proves to be stubborn and eventually re-takes the position to knock out the only piece of German armor in the battle. Subsequently, the German left flank begins to feel pressure and with two Shermans bearing down, things could only get worse for the Germans. 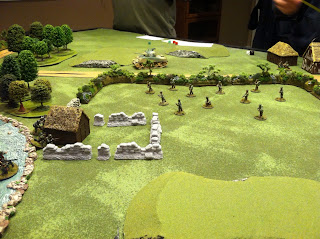 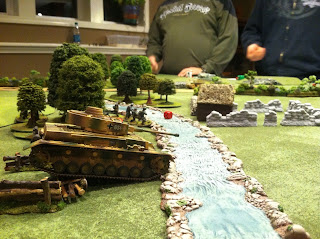