After the arrival of my first order of miniatures, I made the first bad decision of the endeavor.  Choosing the box of Perry Zouaves as a step-off point probably wasn't the wisest choice, as the uniforms worn by many by the zouave and chaussure units of the American Civil War were flamboyant to say the least. Little did I know a more experienced hand in painting would have served me well in tackling these little dudes. Anyway, a few weeks later I was left with a fairly pleasing piece of work for a beginner. 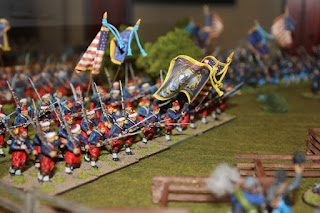 After completing my first project, I started to wonder what I would do with it now that it was completed.  I decided that they looked nice enough to stick in our basement curio cabinet, so I  let them sit there while I figured out what to paint next.  In the meantime, I started troweling the web in search of more stuff to order and stumbled across miniature wargaming.  I guess I'll save that for a later post.
Posted by Jon F at 11/26/2012 04:58:00 PM

Email ThisBlogThis!Share to TwitterShare to FacebookShare to Pinterest
Labels: Perry