Welcome to Curio Clashes.  This is my first attempt at blogging, but here goes.  As you can see by the title of this blog I have an affinity for military miniatures.  My interest in military history and toy soldiers goes back to my days as a child. I owned a rather large collection of everything from Hasbro's line of G.I. Joe figures to the little injection-molded toy soldiers you got in your Christmas stocking. Now, many moons have passed and within the last year and a half I have taken up the hobby of painting and displaying 25/28mm American Civil War and World War 2 miniatures, but let me jump back one step. A few years ago I received a King & Country model of George Armstrong Custer as a birthday gift from my dad. 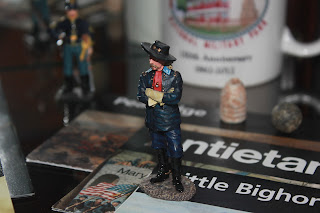 After receiving this gift, I decided I wanted more, but soon discovered that my budget would not allow for many K&C models. As I continued to search for other options for acquiring a collection of miniatures to display in my basement, I stumbled upon the seemingly endless world of American Civil War miniature lines including Dixon, Perry, and Sash & Saber.  I had discovered a way of building a collection of miniatures to my liking at a fairly reasonable price...only I'd need to learn how to paint them.  My first decision would be what scale to go with. It appeared that the three options that would best suit my needs for displaying while offering many choices would be either 15mm, 25mm, or 28mm.  With 25 and 28 being fairly close in size and allowing for better detail, 25/28mm it would be.  My fingers got to tapping and I found an online vendor where I placed my first order for a box of plastic zouaves and some metal artillery kits and mounted officers, all by Perry. I found a local hobby shop in the Kansas City area where I could pick up some paints to get started.  I'm not sure if I had ever stepped foot in a Hobby Lobby or Michaels store, but have found them to be a treasure trove of items that cater to the hobby. So, a few days later I received my very first order of little men and I was on my way. The adventure had begun.

I hope you enjoy stopping in from time to time to see what's new.  I'm sure this blog will move in fits and starts as I learn more about how to customize it and come up with new material to share.

Thanks, Dave. Keep on the lookout for a cavalry project I've been working on.