Last night the Baron welcomed us into his cave to enjoy a night of 25mm ACW bliss (especially Jay). Jason and I had been looking forward to an opportunity to run Foundry's ACW ruleset - Bull Run to Gettysburg. The book includes some great pics of Kevin Dallimore's outstanding work, however we quickly discovered the rules to being the equivalent of a deep-fried turd - a nice taste on the surface but soon discovering what we had just bitten into. First, the QRS is sadly lacking in information that would be better utilized at one's fingertips rather than being buried in the book. Second, as the game ground on, we also discovered that failing a morale check is nearly impossible. I will use the excuse that while still being fairly new to wargaming, I did a half-hearted job of explaining the rules (Jason did a great job of picking up the slack and the other more experienced fellas were able to quickly figure out what was going on).  After last night's game, we are all the more looking forward to Sam Mustaffa's release of Longstreet in the fall. With all that said, all was not lost in that we took some nice pics.

The armies converge on the farmstead of Old Man Wiley 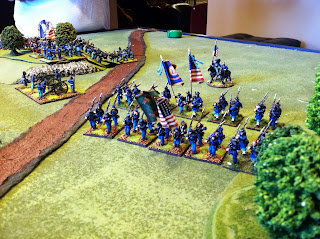 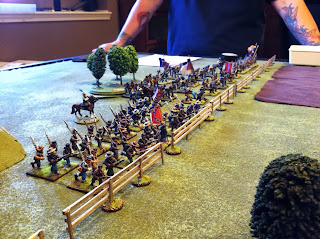 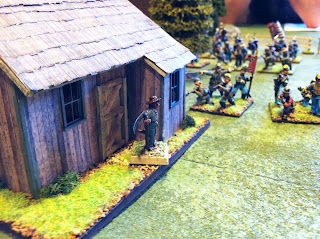 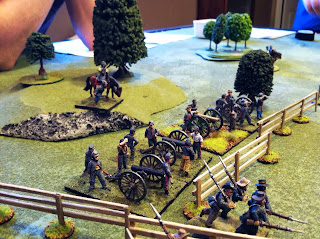 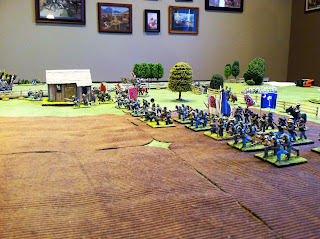 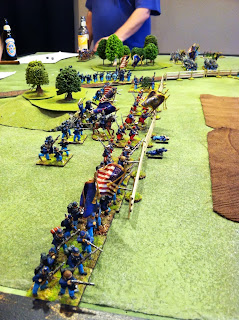 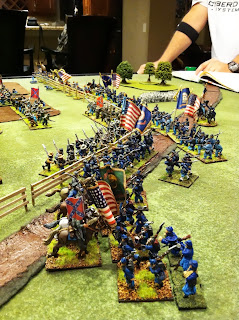 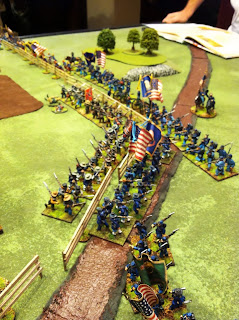 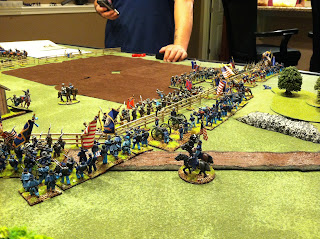 The figures and the set up is fantastic. Too bad about the rules!

Although not my favourite set of rules - we do play them sometimes.
We've found them to be perfectly playable & enjoyable - ok the book layout leaves a bit to be desired but they do work. And they did work better in the original version using a D8 system.

I think you may have missed some of the nuances of the rules.

They're certainly better than the Crusader rules where stuff runs away the first time it takes 10% casualties and are then impossible to rally.

I think we picked it up quick. They sucked compared to what we're used to. But, a night spent with pretty figs , friends and beer is still a great night.

Hi Jon, great to see your blog sooo busy. Looking forward to `do` a battle in the US in a couple of weeks CHEERS!!

Wow...these look great. Where do you get your flags from?