Thursday night the Baron and the Basement Generals ran a non-historical ACW scenario using Black Powder rules. Back in January we ran a Regimental Fire & Fury scenario using 25s.  Being relatively new to the hobby, I don't have a lot of experience in the differing rulesets, but have read through my RF&F rulebook a few times. I believe it is a set that attempts to make a solid run a re-creating an ACW battle as closely as possible, but with all the detail involved, it is very difficult to complete a scenario in a three hour evening with more than 4 players. So, the quest has begun in finding a set that is more conducive to allowing for faster game play. Another set I have purchased and hope to try eventually is Foundry's Bull Run to Gettysburg.  It as well appears to be more simplified when compared to RF&F.

Thursday's game involved a Union-occupied town flanked by their camp on one side and a foundry on the other, locations serving as victory points. The game began with a single Union unit on picket duty in the middle of the field.  Less than half of the total Union brigades would begin the battle off the field, so good rolling (which I have yet to master) would be a must in order for re-enforcements to arrive in a timely manner.  Take a look at the Baron's Blog for a full battle report.

While I had to leave the battle early (not to mention my Union forces on the right flank holding the foundry were carved up in short order), I enjoyed the game a lot.  The game flowed very well, almost to a fault if the rolls weren't going your way.  With these rules, a unit could dissolve very quickly if carelessness and lousy rolling entered play. 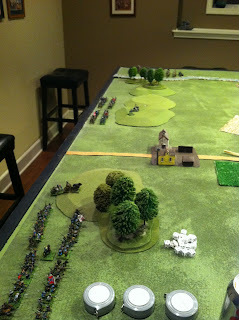 The sides square off 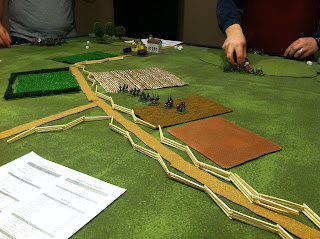 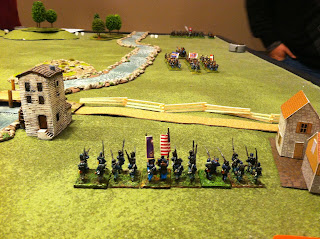 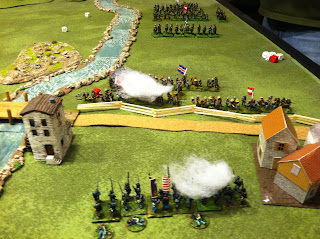 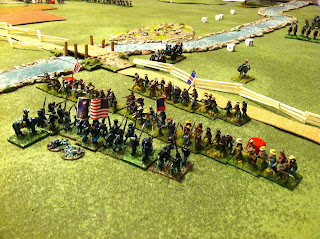 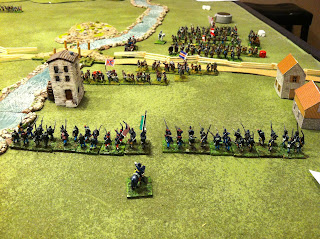 Two Federal brigades re-enforce the right, but fail to put up much of a fight

Very nice. I feel the same as you re: RFnF. I will be basing my ACW for the second time for Black Powder.

Me too. With our group, I am the only person w/25mm ACW. Right now my infantry is 2 figs to a 20x40. I will probably cement two bases back to back, fill the seam with some Elmer's, and flock.