It is my wish that at least one person considering this hobby for the first time will spend some time thinking about how they will base their minis.  I think I mentioned in one of my early entries that I decided on how I'd base mine before I'd even played a game or read a ruleset. Regimental Fire & Fury was a set that I kept seeing pop up, so that's the direction I went.  The first pic shows how I initially based all of my infantry and dismounted cav stands (minus command stands which I based 40x40 from the beginning. These are on 40x20 bases: 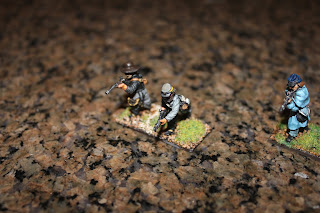 RF&F actually calls calls for 3 minis per rank and file infantry stand, but I chose two for the simple fact that 25s take more time to paint.

After recently playing an ACW (15mm) game at the Baron's using Black Powder rules in order to try a set that would allow for faster play, I decided to combine my infantry bases so everything would be based to a 40x40 stand. I would add that this basing would favor Foundry's Bull Run to Gettysburg rules too (in my humble opinion, Foundry needs to do some work on their quick reference sheet). The process of doing this did not take quite as long as I anticipated. I have a mix of wooden Litko, plastic Renedra, and custom-cut metal bases.  I found that superglue bonds all for these materials quite nicely (or at least until you can bond them further with Elmer's).  Lying them on a piece of aluminum foil allows for easily peeling them off with out them bonding to a workbench or cardboard. Once dried, I applied a bead of Elmer's and flocked.  The Elmer's penetrates the joint where the superglue didn't. Here is the finished product: 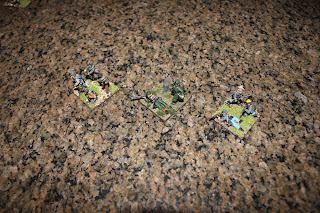 I am pretty happy with the results.  I am preparing myself for a base or two breaking apart during play sooner or later, but for the most part they seem pretty durable.  In addition, these bases can continue to be used with RF&F with the use of markers.

The bottom line is, if you're weighing options on how to base, be patient. Talk to as many people as possible (especially the members of your group) and try to play a few scenarios using different rulesets.  On a side note, the 40x40s cut the number of bases you need to handle in half, which saves time, and that is a good thing.
Posted by Jon F at 3/19/2013 07:36:00 AM

So, when can we play?

A few more brave boys in butternut to go and it's on, baby!