Okay, I robbed Maximus' line from Gladiator for my title, but it sounds cool.  When I last left you I promised Romans. Well here they are - or at least four units of legionnaires. A few months back I got a wild hair to paint up some ancients. As I quickly found out with my 25mm ACW project, you can't paint just a few. With there being a pretty good variety of Romans on the market, I decided to go with early imperial (some of my fellow wargamers will disagree, but I think the opening battle sequence in Gladiator is outstanding).  I proceeded to place healthy orders for several packs of OG 15s and Corvus Belli.  All in all I probably ordered more than needed (all told I will have 11 units of legionnaires, 4 units of auxilla, 4 units of archers and 4 units of cavalry. I have found these to be a bit more tedious than I thought, but fun to paint.  I am basing them to work with DBA rules, but as long as I own them they will probably only see Hail Caesar play.

After completing 3 units of archers I will probably jump back to my ACW project for a while.  Keep an eye out for some homemade hedgerows I made last year. 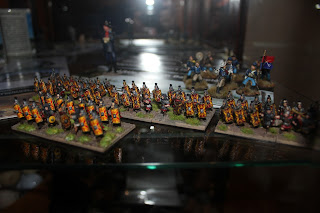 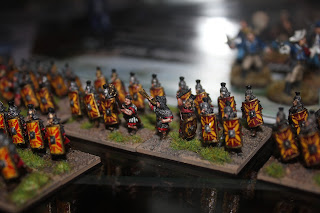 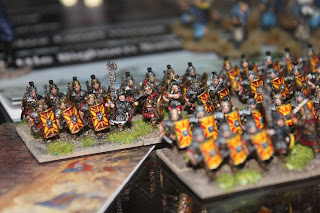 Those are terrible. You should just give them to me : )

Beautiful work on these. That is a fantastic looking unit that should serve you well! Fantastic blog also, I'm looking forward to exploring your projects...

Ha, I'll load em up and bring em to you next Thursday.