Last night was a WWII night at the Baron's.  We hadn't played Victory Decision in quite some time, but Jaye recited the rules in pretty simple terms, thus we were off and rolling.  Unlike our previous games using these rules, this time with the help of assigning a playing card to each unit to determine order of activation, each turn would introduce a new unit to the game (we would later learn while this system offers a more realistic effect, more thought will need to be used in choosing which unit(s) should be placed on the field to begin the game).

The scenario featured a battle pitched within a small, French town. 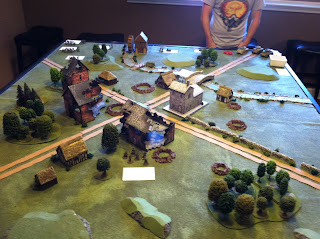 Contact was made between a squad-size element of the 2nd Rangers and a fire team of German Spahtrupp (recon).  The U.S. squad did a great job of not letting the German team set up an MG-42 in an upper floor of a bombed out church.  After several attempts (and lighter on personnel), the Krauts had to pull back. 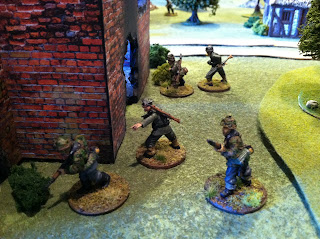 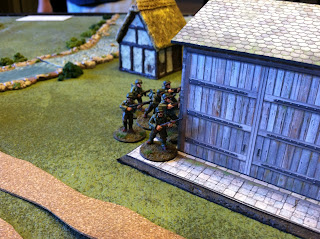 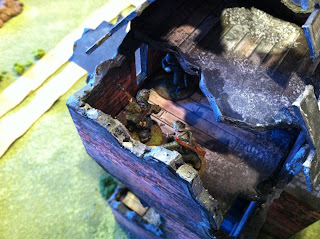 While all this was going on, a larger mixed unit of Wehrmacht and Waffen SS moved up on the right and a Panzer IV started to move on the town center.  To counter this, the first of three Shermans (with a second squad of 2nd Rangers in tow) made a move on the town as well. A nice shot from the Panzer turned the Sherman into a burning hulk for the Ranger unit to find cover behind.  It appeared the Panzer might be able to control the town center...until a second Sherman moved up shortly thereafter. This second Sherman would put two nice rounds into the Panzer and things would begin to turn with the Krauts flat out of armor and only a PaK40 to try and stem the tide of oncoming U.S. armor (the PaK40 would never really be a factor). 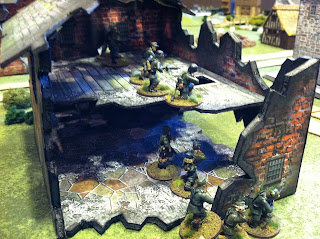 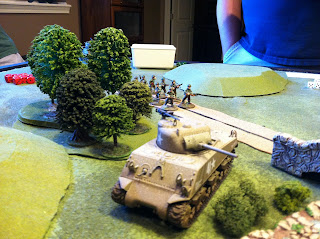 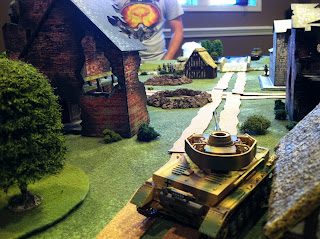 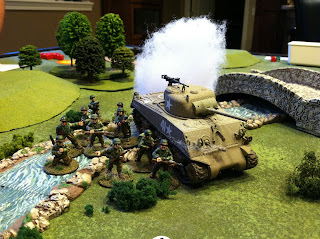 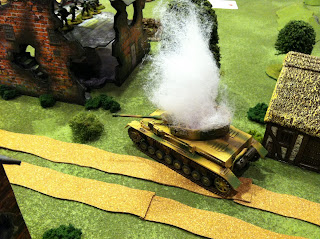 The German infantry unit on the right made an attempt to flush out the first Ranger unit out of a building where it had been wreaking havoc, but the attempt turned fatal by return fire from the Ranger unit and a third Sherman that had moved in on the German left. 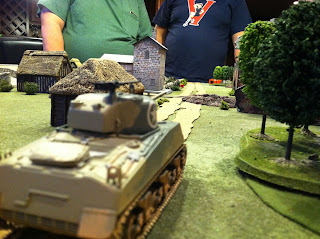 Following the third Sherman was a unit of 101st Airborne. After linking up with the second unit of Rangers, it became apparent the Germans were in real trouble as a team of another unit of mixed Wehrmacht and SS got caught with their pants down in the open and was chewed up in no time. 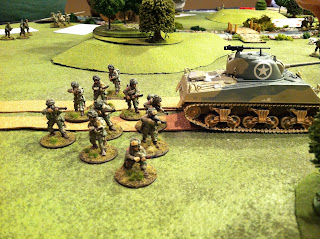 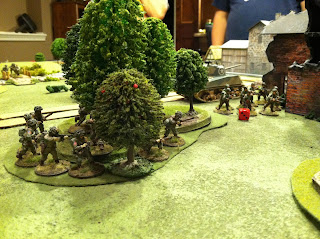 The Krauts were never able to take advantage of a medium mortar team that began to move up (and never even got a sniper team on the field) and the Americans wrapped up a pretty easy victory with minimal casualties.  There was some debate over the minimal effectiveness of the German MGs compared to some U.S. BARs, but with some careful planning the next time around, the Germans should be able to take advantage of what was historically a much more feared weapon in the MG-42.

You get that MG42 in the right place and it will control the battlefield. Firing all htree actions, even if the enemy takes no casualties (which would be tough 3+ to hit and 5&6s kills) you'll be putting 6 Suppressions on a unit a round. Ouch!

Sorry I missed it Jon, as always your scenery and figures are gorgeous.

Thanks, Scott. Hopefully I'll do it again soon as it seems the rules are starting to make more and more sense each time we run it.