Last night Brett and the Baron made it over for an ACW clash using our Black Powder rules (Jaye's Glory Hallelujah supplement has gone missing, so we couldn't use some of those rules).  I had anticipated a small showing with Thanksgiving the next day, but we decided to throw a lot of troops on the table anyway. The Union side would get the advantage of two gun batteries while the Confederates would benefit from a small cavalry regiment. 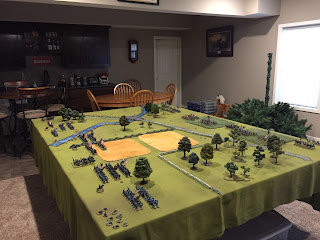 With the opening move going to the Yankees, Brett and I got the center and left flank moving, however the right flank (held by five regiments of the Irish Brigade) would not get in the fight until the third turn. 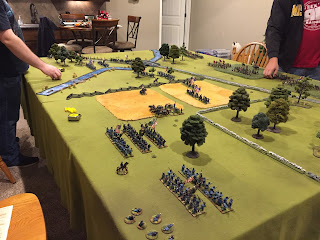 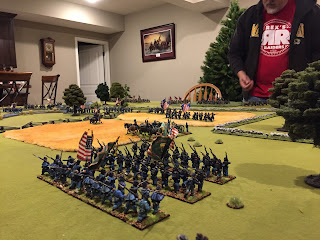 The Iron Brigade would enjoy some successful volleys thrown at the a pair of Georgian units during the first turn, but the CSA middle would rally with some help from its left to blow a hole in the Union center.

Finally the Union right would spring into action and begin shifting units left to cover the center. On the left, Brett would begin to hook around the CSA right flank. 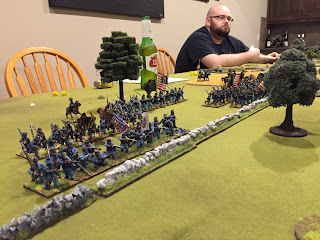 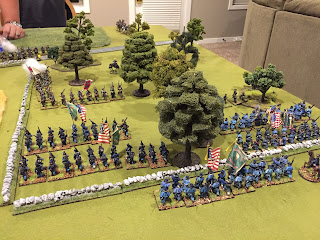 Prior to being run off, the Iron Brigade would inflict enough damage, while Brett would begin to pour into the CSA right that two shaken Rebel brigades would result in a Union victory. This game turned on a dime enough so that we may institute a new house rule - over half (rather than half) of an army's units will need to be eliminated before a victory is declared.  All in all it was a fun night and as early as the game ended, there was plenty of time for a few beers, Dr Peppers, and some good discussion. Happy Thanksgiving.
Posted by Jon F at 11/24/2016 10:21:00 AM