On Thursday night we were in for some 28mm ACW action using Black Powder rules along with Regimental Fire & Fury's Kernstown scenario from the RF&F Vol. 1 scenario book. The Baron was kind enough to run through the rules for us since this would be the second time I have ever played a game using BP rules. The first battle of Kernstown, an early battle of Stonewall Jackson's famous Valley Campaign, was fought on March 23, 1862. It was the only battle Stonewall Jackson would lose during his illustrious military career, however it was a strategic victory for the Confederacy due to the pressure it placed on President Lincoln to take Jackson's small Valley District army more seriously, subsequently committing more Union forces to the northern Shenandoah Valley in order to protect Washington. As a fan of Jackson, it was a lot of fun to set this scenario up and play it out.

As it was historically, a much larger Union force under the command of Nathan Kimball would attempt to at least kick Jackson's army back up the valley and out of reach of the U.S. capital. On this night the Rebels would do a fine job of securing nice defensive positions while landing some solid blows on the chin of Kimball's division. We discovered early on the RF&F scenario would not make a clean conversion to BP. For one, the RF&F scenario is laid out with some commanders more that the 12" BP command radius from their respective units (in a few cases, a commander is not on the field at the same time as some of his regiments). This proved a challenge in activating units. We will need to craft a way to address this challenge.  Despite a few small hiccups, it was a fun night. The battle was moving in a direction that could have provided a few more hours of play, but was decided a draw at 10:30 p.m. 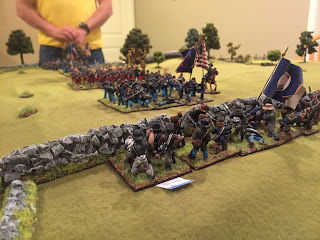 Jackson observes enemy positions from the heights of the sandy ridge. 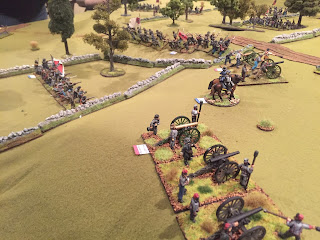 Regiments of Tyler's brigade smash into the 27th Virginia.  The 27th would earn its name as part of the Stonewall Brigade. 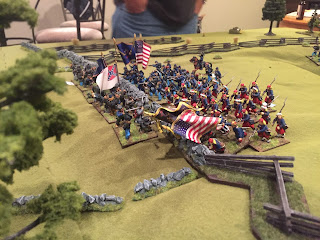 Units of Kimball's 1st and 2nd brigades begin to flood in from the east. 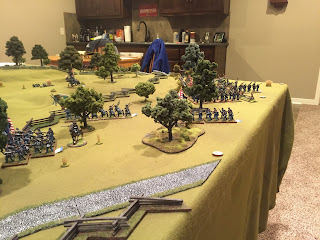 The battle begins to take shape. 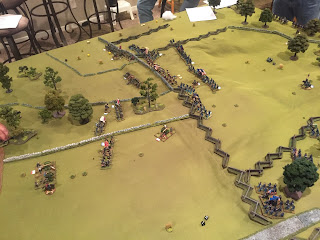 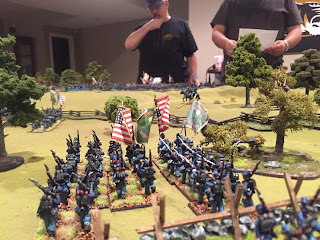 "Forward, men! To the sound of the guns!"

The Union center would begin to take its lumps. 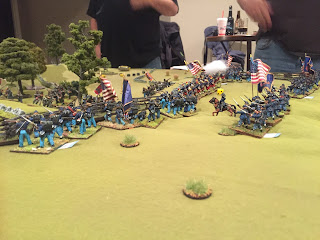 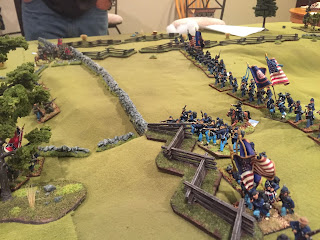 Regiments from the Rebel 1st and 2nd brigades enter the field. Bad rolls would delay multiple regiments from the Stonewall Brigade to get into the fight, however this would not hinder Jackson's army significantly. 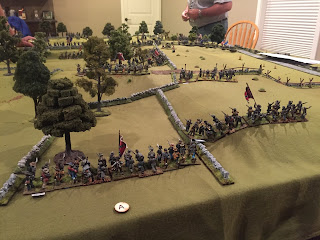 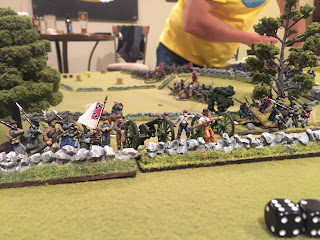 Union cavalry moves in to strengthen the right. 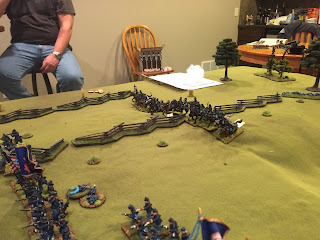 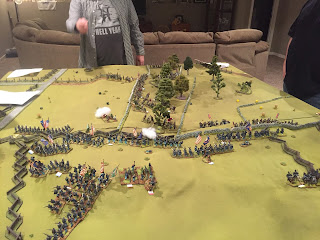 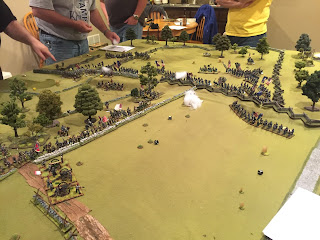 The heaviest losses on both sides would occur in the center. 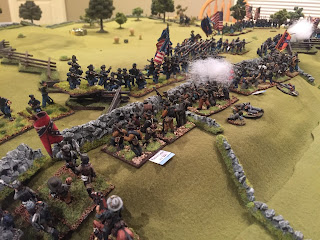 Beautiful game! We are planning on running this scenario after the first of the year (but using the RF&F rules in 15mm), and it's encouraging to hear it gave a good game.

Thanks for the comments.

Scott, it's been just over four years since I first contacted you seeking advice on where to start. Obviously it's been a work in progress, but it's come a long way. Thank you for your help.

Jon, great looking game! Where did you get the stone walls? They look great.

I made the originals by gluing pebbles together and then made molds (one each for the high and low walls). I made a ton of them for this game using PofP. I added the riders to some to spice them up a bit. Jaye's using them right now but I would be happy to send them to you when he's finished if you want to borrow them.

Jon- giving more and more reasons for a return to Recruits next year!
Cheers
Ths

Thomas, Happy belated Thanksgiving. I think a trip back to KC next year would be a great idea - BBQ on me.